Hulk is too hulky.

One of the long-standing stories that we love to tell at the college is that no one uses email, especially students. Or my favourite: “email is for old people”.

Email is still the de facto standard of communication within and between organizations. It certainly is the blessed-and-sanctioned standard at NSCC.

“I don’t check my email” isn’t a free pass on missing some important deets. That goes for staff and students alike.

If you disagree, feel free to fight me after school. I’ll be waiting by the bike racks with the rest of my nerd herd.

Girl, there ain’t no I in “team” But you know there is a “me” And you can’t spell “awesome” without “me” I promise that you’ll never find another like

Anyway, the truth is that communication is changing and there is a world beyond email. What’s funny is that the thing that’s being touted as the new-fangled usurper of the crown isn’t all that new at all.

I’m talking about chat and discussion boards, both around since the mid-80s.

We used to have this thing called Internet Relay Chat (IRC) for real-time conversation between members. There would be channels where the conversations would be somewhat broken into topics. MSN Messenger, Google Talk, and Facebook Messenger are evolutions of this.

Also, there was USENET or newsgroups, which resembled email in a lot of ways but was more public and the threaded conversations could be archived and searched. Most of this is sitting in Google Groups.

Cultures grew up in both these universes and while wildly popular in their communities, there was always a vacuum. Like we wanted something more.

These tools still lingered after all the DotCom crap and amid all the social media infiltration of our lives where we sell our souls to the data mining gods of Facebook and Google.

But the trick here is that they’ve professionalized considerably and merged into something better.

There are two main players in this space.

*Note, Skype for Business is being retired in 2021 but, until then, it’s still in your tool box.

Microsoft Teams has a few elements that you may recognize. I’ll run through the left navigation of the tool.

So, a couple of observations: 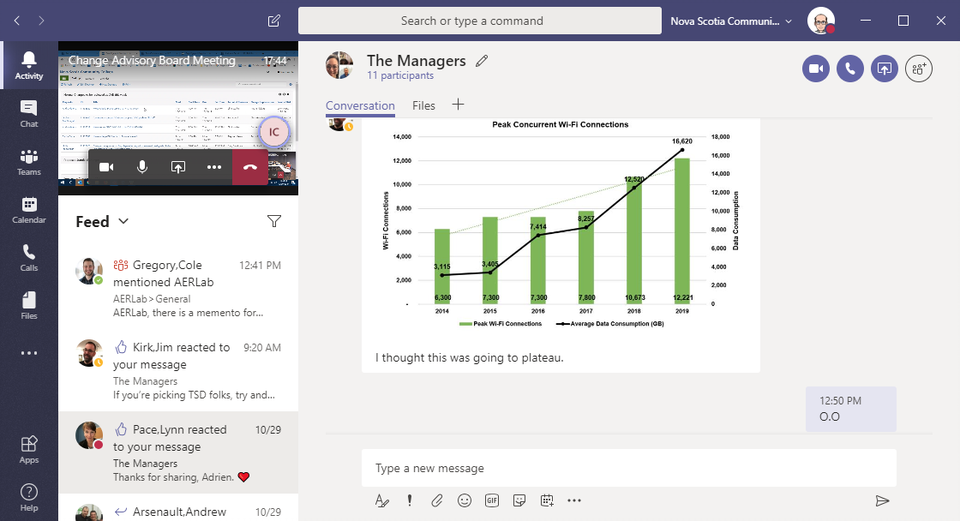 The only thing you can’t do in Teams is email.

Which is kinda funny if you think about it.

We’ll talk more about the team-y part of Teams next week.

A Note on Teams Etiquette

Gleaned from 2 years usage by DI&Tech

It’s a social technology and like any tool, the human-side of the equation matters most. Here again are some guiding principles: