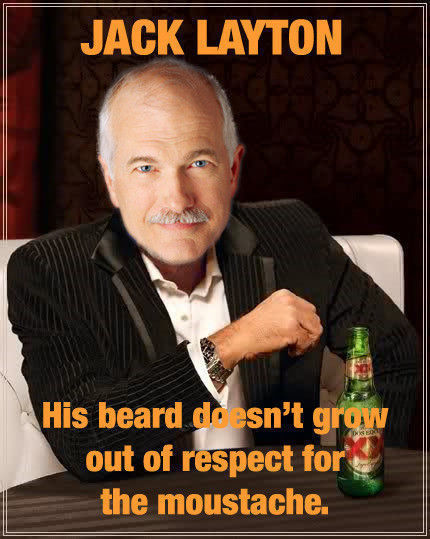 I’ve voted NDP in every election for which I’ve been eligible save one. The first time I exercised by democratic right, I voted for Kim Campbell’s Tories — that worked out well.

I spent my teen years in Pictou County where the Mackay dynasty was deep and blue. My mom was an Antigonish Liberal and my dad was (and is) as traditional Tory as they come.

I could perform an uncanny (if I can be so bold) impersonation of then Prime Minister Brian Mulroney (back when I had hair). Gramma got a hoot out of that as she would often spin a yarn about Mulroney’s days at St. FX and his visits to the Cottage Store that she ran. She found him wily then. I was PM of the Model Parliament (yes, in character) at East Pictou Rural High and got to meet Mike Duffy.

So why did I vote for Campbell? Perhaps it was all this Progressive Conservative history. Nah. I voted for her out of a sense of knocking the status quo and electing Canada’s first female Prime Minister. The issues didn’t matter at the time — it was typical youthful idealism that drove me to the ballot box.

Of course, the subsequent fracturing of the Right that ensued brought forth the Reform and Alliance Parties as well as the Bloc. I couldn’t relate to the fundamentalists and the western movement for change was foreign to me.

So I voted for Alexa MacDonough and her band of heroes. I had moved to Lower Sackville at the time and John Holm, Peter Stoffer and Dave Wilson were incumbent NDPers. They gave authentic campaigns — I chatted with them all. It was easy to vote Orange.

As I’ve gotten older, my ideological sensibilities ebb and flow between Left and Centre. I work for a strong social enterprise in higher education. I’ve become more jaded to organized religion (who hasn’t?) I like a strong government, but I like it in small doses. Most importantly, I like a local candidate who works in and for their riding.

So, voting Orange has become a traditional default choice for me — it’s not a protest vote. It’s just where I’ve landed.

What’s funny is that choosing Liberal has never been a serious option for me. Maybe it’s that they’ve been demonized as ‘campaign from the left, rule from the right’. It might be as simple as they’ve been scandal-ridden during most of my voting tenure. Despite admiring Chretien’s guile and irreverence, I never looked past my riding’s candidates.

Now, this most recent election was one in which I broke my own ‘politics is local’ mentality. I engaged in the Americanized drama of a slug-fest between leaders for whom I don’t get to vote. Leaders are important, but we treated them like presidential candidates more so this time. I spent far more time on leaders and platforms than ever before. I got caught up in the hoopla. Get out the youth vote!

Perhaps it was because this was Canada’s first social media election. Facebook and Twitter had a large impact, both directly and by proxy through mass media. It was almost as obsessive as the polling.

I wonder how much of the Orange Crush came as a result of the frenzy — especially in the latter days of the campaign. Meh. I’m sure #elxn41 will be studied with all due scrutiny.

So here we sit with a Conservative majority. Given their Reform and Alliance roots, I don’t feel comfortable with the direction they could take us. Today’s Conservatives are not yesterday’s Progressive Conservatives. Time will tell if that’s a good thing or not.

However, I don’t think the Tories will abandon all reason and privatize healthcare, ruin the internet and sell us out to the American value system.

A majority government is no more or less evil than a coalition one — despite all the campaign rhetoric. Both are valid ways of getting things done in our system. I’m just weary of minority rule and frequent (and expensive) elections.

Jack and his merry band of newbies will hopefully be effective in balancing the extremes of the Conservatives and we’ll be governed from the centre of the spectrum just nicely, thank you very much.

If there was any issue that we can take away from this election is that we desperately need electoral reform. Turnout continues to be low. 12 million people voted and only 5 million votes counted in this First Past the Post system we have. That means that 7 million votes didn’t count for anything — no wonder so many stayed away from the ballot box.

Whether it’s Proportional Representation, Alternative Voting, or some other scheme, it’s got to be better than what we have now. I’m very curious as to the results of the UK Referendum on the topic.