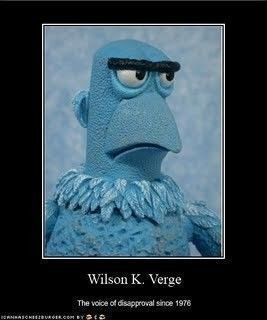 I met Wilson in the summer of 1998. I was doing some very hands-on IT consulting for the NSCC Metro campuses. In conversation, I made the mistake of letting slip what my wage was. Compared to what I was being billed to the college, he shrewdly deemed that he could hire four of me for about the same spend. I went to work for him the following summer along with Dan, Donnie and Dale in a newly-formed IT shop with a mountain of challenges before it.

I had thought I was prepared for his unique style of leadership given the chaotic masters I’ve worked for in the past. It took most of two years to figure out how to interpret and perform from his direction. Things would come from far-left field. Systems were not stable. The team was under siege.

Wilson’s management style reflected the needs of the college at the time. We lived in a persistent state of triage, so he was decisive and fierce. He wasn’t popular, but he was effective. He was unpredictable but clairvoyant. The tech team didn’t know which way was up. There was just so much to do. Like good lieutenants, the troops referred to us as “The Friendly Wilson Interface”.

Time passed. Problems got solved. Things got better. But Wilson had a habit of changing it up.

Wilson would always say "You can't manage what you can't measure".

Everything became about metrics. While the rest of the college was concerned about growth, Wilson was harping on operational efficiencies like some crazed prophet in the wilderness. He had us tracking everything, whether it made any sense or not. In hindsight, I believe the goal was to determine our true capacity and to test the organization’s tolerance for change. Or perhaps our own tolerance of him.

That’s when we started building out IT. In truth, we were always building but Wilson stomped on the gas. The management team specialized to accommodate the growth and operational overhead. But something changed. Wilson adopted a leadership style with the team that granted more latitude with more accountability. He’d challenge the ideas, often playing both sides, to force us to validate strategies and tactics. It often wasn’t pleasant if you were in his gun-sights and he often quoted Yosemite Sam:

At the same time, Wilson nurtured a culture of debate within the team ï¿½” he suffered neither platitudes nor “yes-men”. He thrived on conflict. He would plant himself firmly on the fence and force all takers to choose sides. Arguments could be fierce at times (I quit more than once) but we somehow always ended up in the right spot.

When he left for Naniamo, I had two thoughts that I couldn’t reconcile. One, that he was no longer a source of stress in my life (for good or ill) and two, that he was likely going to come back as this was all part of some nefarious and complex plan to further the college’s technology agenda.

He fancied himself a student of humanity. Perhaps he intellectualized his understanding of human behavior because social graces didn’t come naturally to him. He was often very good at reading people in a controlled environment like a meeting or a negotiating table. But when he missed a cue it was spectacular. He reveled in challenging people and was genuinely surprised and remorseful when he pushed too hard. His was a kind soul ï¿½” despite his not really believing he had one.

His secret weapon was in mastery of the Logical Fallacy ï¿½” that lovable dysfunctional logic that he used to test if people were paying attention. Passive-aggressiveness in others was his Kryptonite. He collected behavioral “tricks” that he observed in others. The debate still rages as to whether his “absent-minded professor” persona was a disarming tactic or a coping strategy. Perhaps both.

Anyone who knows me, knows that my favourite work activity is scheming. Scheming is that deep collaboration that forges strong partnerships and a Master Mind. It’s like a kind of magic. Wilson taught me how to scheme and to love it as an art form. Strategy, technology, politics, religion, high-finance, psychology, geopolitical world history and the decline of the American Republic. Nothing was off-limits. Especially with a load of Nicorette and sketchy coffee on board. I’ll miss that. We all will.

A couple of years ago, Stephen Parsons interviewed Wilson as part of his exploratory work on e-portfolio. Following is the interview that highlights Wilson’s insight and creative thinking.