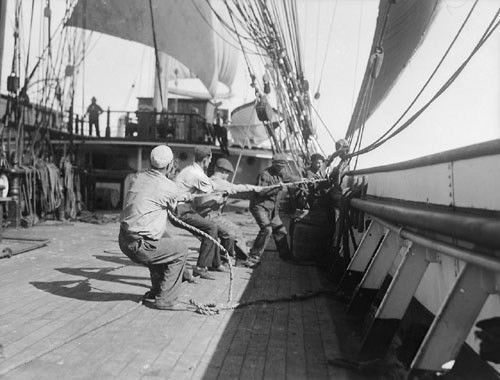 I live in Nova Scotia and have most of my life. It’s a smallish province, nearly surrounded by the Atlantic. At any given point, wherever we are in the province, the ocean is an hour or so away. Even inland, the salty air can tickle our noses if the wind is just right.

A maritime culture is just who I am. Music and verse is a big part of that.

One of the earliest books I picked up was one of my mother’s old school readers ‘Old Heritage’. There are many great reads in this book and from time to time, I still thumb through it.

One of my favourites was a poem called ‘The Yarn of the Nancy Bell’ by Sir William Schwenck Gilbert.

At once a cook, and a captain bold,
And the mate of the Nancy brig,
And a bo’sun tight, and a midshipmite,
And the crew of the captain’s gig.

You can read the whole thing here: http://www.victorianweb.org/mt/gilbert/yarn.html.

Another epic poem in the book is the classic ‘The Rime of the Ancient Mariner’ by Samuel Taylor Coleridge. Many stanzas still haunt me.

‘God save thee, ancient Mariner!
From the fiends, that plague thee thus!—
Why look’st thou so?’—With my cross-bow
I shot the ALBATROSS.

You can find it here: http://www.poetryfoundation.org/poem/173253. It’s still pretty much the longest poem I’ve ever read (even my Robert W Service standards!)

Of course, by the time I hit my teens, I’d moved on to more modern fare and wore out a couple cassette tapes with Iron Maiden’s version:

My university time featured many nights caterwauling with my friends. I may or may not have been sober, but nearly every evening contained a rousing singing of ‘Barrett’s Privateers’. None of us sang as well as Stan Rogers.

One can’t go wrong with either of these:

Twenty years later, I still sing these songs and shanties— usually at bedtime to my grandson. I sit on the floor beside his bed and belt them out, thumping my hands on his mattress to keep the beat.

He falls asleep quickly but I stay to finish the set. I’m having too much fun.

At some point, when he gets a little older, I will introduce him to the Ancient Mariner.