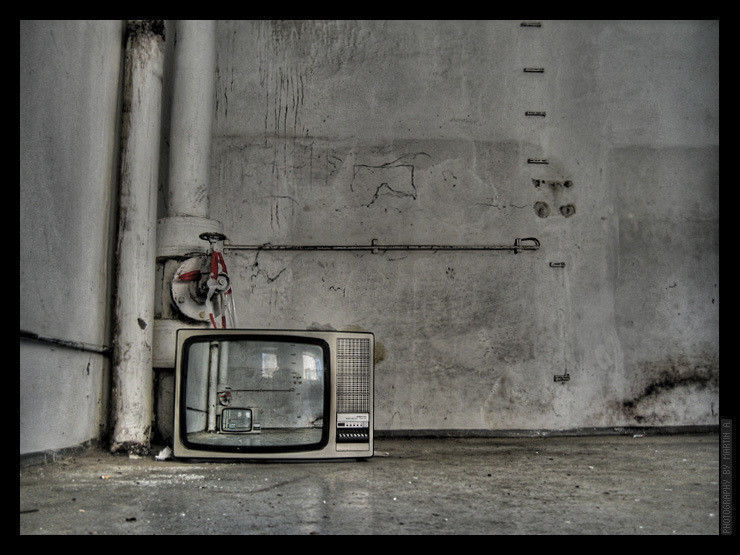 Hello, fellow quill-bearers! For your mind-bending pleasure, here is another open-ended dilly of a question:

We’re often told that to be great writers, we must read voraciously. Does the same hold true for television and film? Are there different writing lessons to be learned from watching sitcoms, dramas, and their ilk? What magical insights of word-craft mastery, if any, have you gleaned from the proverbial ‘idiot box’, ‘idiot’s lantern’ and ‘boob tube’?

I tapped into the hive mind of my fellow writing kin and remixed the feedback.

To start it off, one writer presented a rather sobering viewpoint:

It all depends upon the author’s motivation. If the goal is to write to be published and then rich and famous, you better have your finger on the pulse of the average consumer. If your goal is to become a better writer, and you don’t mind living forever on the hinterland of obscurity, TV would be for the most part a waste of time.

The supposition that aping TV and film as a necessary evil to be a commercially viable author makes me sad. Partly because it just might be true to a larger extent than we’d like. My wee writing soul just died a little.

Now, there are some fantastic shows out there. There’s a lot of crap, too, but not much more than there is crap literature. And even the crappiest stuff you consume can teach you something. Even the act of finding flaws is instructive. It’s why writing teachers teach students to workshop papers together. The mere act of weeding works of art by other people gives you insight into doing it to your own work.

If nothing else, studying TV can help with dialogue, or, if you are interested in script writing at all, how to craft a scene. Even something as ‘mindless’ as a sitcom has a tremendous amount of work put into it, and while the writing is only a part of it, it’s still writing.

If you need to capture a younger voice, like a teenager, but you don’t have any teens around, watching something like Modern Family may help. Need an uptight Southern Belle? Watch old reruns of Designing Women.

You just have to be careful not to make your characters mimic what you are watching, or make them too cliche or perfect. Beware of the commercialized perfection of characterization. Not all of it is healthy. Look at all the pretty people, where even the bad are perfectly bad! Falling into tropes and stereotypes is certainly a dangerous risk.

It’s a training ground for your ‘Writer’s Mind’. If you’re a visual learner, watching TV and film can help you develop more of an eye towards story, character, and plot. Sure, many a show and movie will be ruined for you because you’ll recognize the bad, but when a show is well-written, you will enjoy it even more.

Even bad TV, if it captures your interest, adds something to the fabric of your imagination. It is like Wikipedia: take everything you see as a biased view of a given situation, use it to promote curiosity about the ‘other camera angles’ you did not see, and use it as a springboard for your imagination in the telling of your story.

Live your life. Study and emulate the people you come in contact with. People-watching makes for some great characters! Yet, it remains reality that these same people watch TV and film. It invades and influences our culture. Our collective storyline is a string of catchphrases and idioms. In a strange twist, to eschew TV culture in your modern-era story-settings would serve to hamper realism.

To bookend this post, an interesting train of thought on the dark side of TV culture was raised:

We are among the first generation that has lived with TV and its digital-kin their entire life. It remains unseen what effect a continuous bombardment of digital memories will have on ageing brains. Will old folks with dementia, Alzheimer’s and natural brain shrinkage be able to differentiate memories planted from movies, TV, etc. from what happened in their physical lives? Or, are we going to have an entire generation of old folks racing through nursing homes buzzed out on NoDoz because Freddy Krueger is after them? It’ll be a nightmare on every street.

This really hits home to me given my mother-in-law’s advancing vascular dementia. One of the few things that gives her structure to her day are reruns of Criminal Minds. I’m now a little frightened at what could happen when she fully loses contact with the present. Will she also lose the real world and live in la-la land?

Anyway, Mark Twain said to keep ‘all things in moderation, including moderation’. TV too, I guess. Oh, and remember: if you’re watching TV, you’re not writing.

Many, many thanks to Riss-Ryker, Shanna, Emmex, Lindsey, Delores, Julia, Rachel, Cameron, Matt, Craig, Tracey, Robert, Tim, Anisa, Karen, Carol, and Bookworm4more for the interesting discussion on this post.