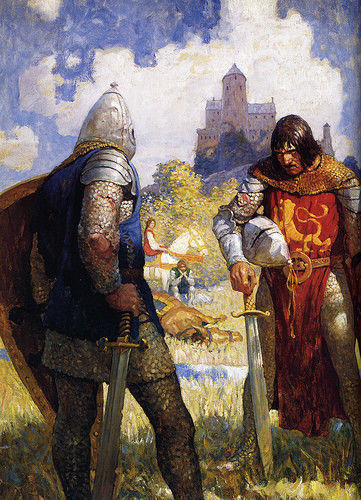 Do you love historical adventure sagas that span the centuries? Can the Arthur legends be true? What’s the real story behind the Knights Templar? Is there more to William Wallace than just a warrior prince?

Do you wish Louis L’Amour wrote stories set in the first millennia?

If your answer is an adrenaline-pumping ‘hell, yeah’, then look no further! Jack Whyte is Scottish born and raised but has lived in Canada for more than 40 years. Author, poet and performer, Jack has spent many years honoring Robert Burns and served as official bard to the Calgary Highlanders.

His most notable work is the series ‘A Dream of Eagles’, also known as ‘Camulod Chronicles’ in the US. The six books in this cycle follow the Roman withdrawal from Britain to the coronation of King Arthur. The first two books are narrated by veteran legionnaire and swordsmith Publius Varrus, the next two are told by Caius Merlyn Britannicus as is the final two-volume finale.

Well-researched and without a stitch of magic and mysticism, the story weaves together a credible origin for Excalibur and her power, the founding of Camulod amid chaos, and the pressure to unify and lead Britain against those who would lay claim.

There is swordplay and guerilla warfare. In the midst of infantry life and cavalry tactics, there is hope, triumph and ultimate tragedy.

Jack also crafted a story of Uthur Pendragon as a companion to ‘The Eagles’ Brood’:

So, what happened after Arthur Pendragon was crowned Riothamus? Our master storyteller didn’t leave us hanging. The final pair of novels are told from Arthur’s aide-de-camp, Clothar, and finish with the fall of Britain into darkness.

A great layout of this series is on Wikipedia: http://en.wikipedia.org/wiki/Camulod_Chronicles

If that only whet your appetite, then you’re in luck. Jack Whyte’s next ambition was to take the same historical approach to the saga of the Knights Templar, several hundred years later. In ‘The Templar Trilogy’, you’ll find three distinct tales told from members of the St. Clair / Sinclair family. The first story describes the founding of an order of fighting monks known as the Poor Fellow Soldiers of Christ and its relationship to The Order of Rebirth in Sion. The second novel’s story revolves around the Templar role in the Crusades, while the third is full of the intrigue and betrayal surrounding the events of the fall of the order and exile.

Whyte’s Templar saga happens in the same universe as his Arthurian epic, sweeping from France to the Holy Land and eventually to Britain. The reader’s mind delightfully stitches together the threads of the broader history. It is rich and lushly endowed with the same sense of authenticity.

This trend continues with Jack’s ‘The Guardians Trilogy’, tales of Scotland’s journey to freedom through William Wallace, Robert the Bruce and Sir James “The Black” Douglas.

The as yet untitled third book is due out this year, with a possible fourth book in the works for this series. This interview from 2010 is great: http://www.youtube.com/watch?v=0oOZZeDwjHo

Jack’s had some health challenges lately but is still kicking and writing. He blogs regularly and has an active reader community forum on his site.