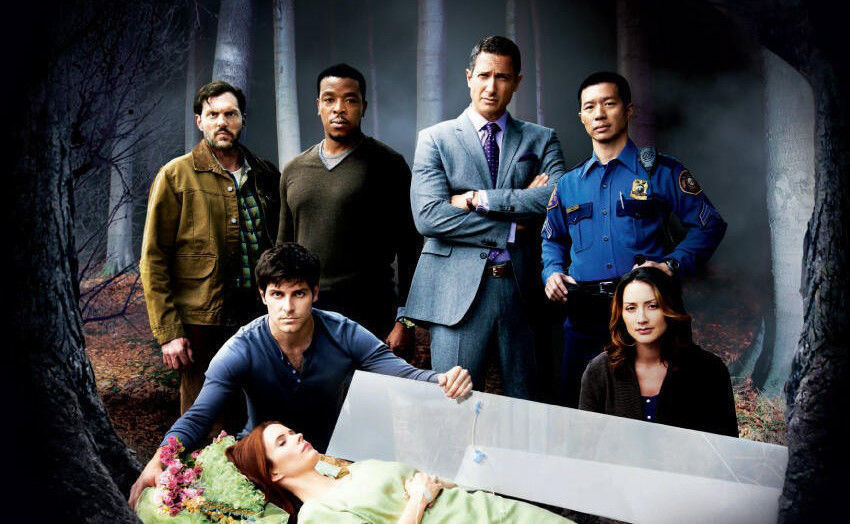 So, I have to admit something.

I enjoy binge watching TV shows. There is nothing better than curling up on the couch with my best girl on a stormy weekend and blasting through a season of our favourite series as if it was one long epic movie. We’ve been know to deliberately not watch a season or at least let several episodes queue up so we can watch them in one big marathon session. To experience a brand new show this way is amazing.

Currently, at the suggestion of our son over Christmas, we’ve decided to watch the paranormal police drama, ‘Grimm’. It’s in its fourth full season right now. We started at the beginning last weekend whilst hiding from the wind and snow. More than thirty episodes in, we’ve become hooked.

One of the neat things about watching a series this way is that you get more invested in all the subplots. Each episode has a ‘freak of the week’ because that is the genre, and that’s totally entertaining on its own. But we love the story arcs between episodes, the character development and even the soft-touch details. They pop out and raise the immersive experience to another level.

As a writer, this is gold.

I’ve previously posed the question about whether TV rotted the writers brain or not; and firmly believe in what can be learned about pacing, storytelling and the special magic that keeps the viewer tuning back week after week. Isn’t that same addictive behaviour something we want from our readers?

Most of my work to date has been of the short fiction variety, but I’ve had the opportunity to stretch myself and tackle longer projects. I blasted through ‘The Crucible Game’ during Labour Day weekend’s ‘3 Day Novel’ contest and then tackled ‘Haley Unknown’ during NaNoWriMo. Both are what I consider as finished S.W.D.s (crappy rough drafts).

As I read them over in the first of many editing passes, I notice the glaring shortcomings. Subplots, character development and thematic arcs are all in need of rework. I’m not upset by this; that is part of what happens when you write under the gun. You’re either writing a character-driven piece or a plot-driven one, seldom both. I’m happy to have the story bones out of my head and in a form I can sculpt.

Which brings me back to binge watching TV series, and particularly the one I’m watching now, ‘Grimm’. Clearly, the writers have done a bit of peculiar planning of which my own stories would benefit.

What I’ve observed, is that they, the writers, have taken the time to define every pair of characters’ relationship, be it positive or negative. Sometimes, they become part of the main story arcs and sometimes they are more episodic. What’s interesting is that I can name any two characters in ‘Grimm’ and be able to say something about the pair. It’s quite fascinating and instructive.

This got me to thinking of taking a different approach to planning and revising my longer works.

First, character sheets matter. I talked about this one before and it’s pretty common advice. Get the backstory written down, whether you use it or not. The act of taking the time to learn about your characters is more important than the actual result. Do this for protagonists, antagonists and any significant player.

But, let’s take it to the next level, shall we? Dive into the Character Matrix.

Grid off a sheet of paper and write you characters’ names across the top and down the side. Each square will represent a relationship. There will be a diagonal line where the characters intersect with themselves. Use this to document inner conflict. Use the top intersects for relationships and the bottom for points of conflict.

Oh yeah! That’s what I’m talking about! Bedrock has some foul-times a-coming. You get the idea. Use as much or as little detail as you need. Places and events can all fit into a matrix like this. How to the characters react? Yada yada.

I think, that by doing this for my stories, I’ll be able to weave in character development and subplots more subtly and up my game in authenticity. I’ll probably be able to write past any ‘blank-page-itis’ that plagues me in the middle part of my tales.

What do you think? Is this off-base? Do you have any tricks to share in story building?