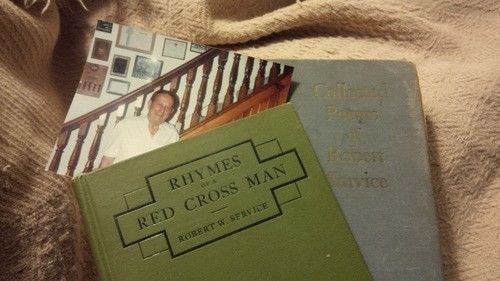 Some of the best memories of my grandfather are of Robert W. Service. Gramp would, at every opportunity, recite from memory any number of poems. We’d goad him to keep going, verse after verse, sometimes for hours. With the cadence and ease of a master storyteller, he’d entertain and love every minute of it. The sparkle in his eye when he had you in his spell makes me smile.

My grandfather lived a full life, worked hard and loved his family. He discovered the words of Robert Service while working in the woods and identified with the bard.

Robert Service (1874-1958) was celebrated in his time, an achievement in itself. With rollicking rhythms and comical rhymes, he was a people’s poet and crafted verse that didn’t always meet the scrutiny of his contemporaries— a ‘Canadian Kipling’ for good or ill.

Born in England and raised in Scotland, he found himself in British Columbia at 21 working and quitting many jobs. He wrote several pieces for the Victoria Colonist between 1899 and 1904 before being transferred to Whitehorse by the bank he was working for at the time. During this time, he wrote his two most popular works: Songs of a Sourdough (1907) and Ballad of a Cheechako (1909). His novel, The Trail of ‘98 was also written and published in 1909, granting him financial independence. He traveled to Paris and eventually settled there in 1913.

During the First World War, Robert Service served in the Ambulance Corps of the American Red Cross and was recognized for his contributions with the 1914—15 Star, British War Medal and the Victory Medal.

In the 1920s, he wrote several thriller novels, some of which were made into silent films. The 1930s were marked by travel, including to the USSR. He fled France to Canada at the outbreak of WWII, and spent time in California. In 1942, he was asked to play himself in *The Spoliers, *opposite Marlene Dietrich, John Wayne and Randolph Scott.

He returned to France after the war and died in 1958. Canadian broadcaster, Pierre Burton, recorded his autobiography for television the spring of his death.