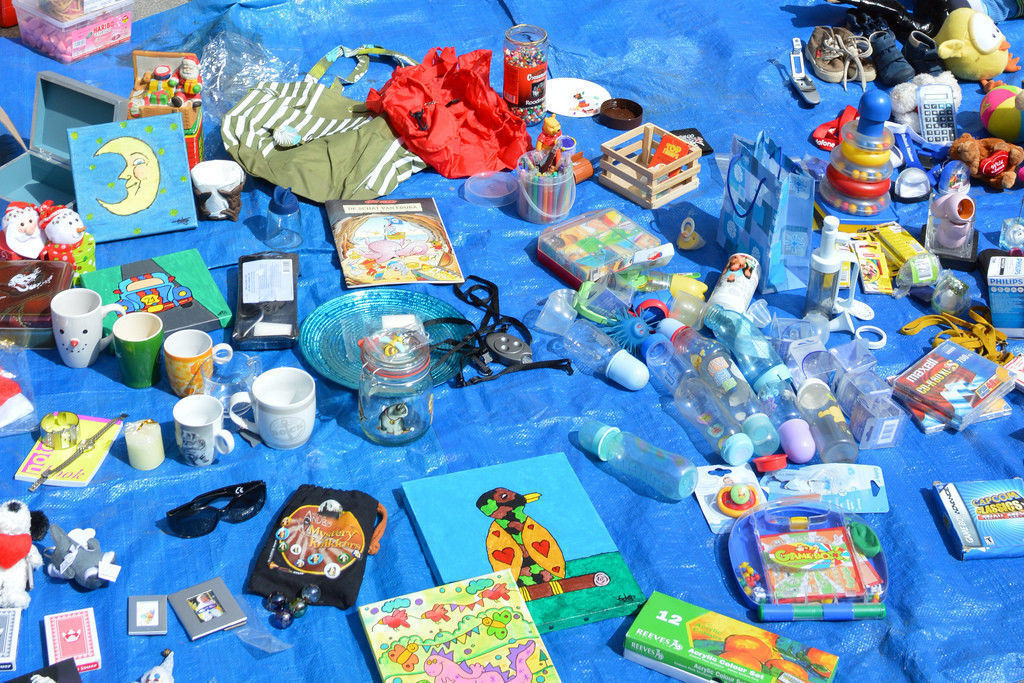 Saturday mornings were never complete without the obligatory yard sale run. We’d hop in the family beater and dash from trailer to trailer all over the park to look at other people’s cast-offs. We rarely found anything truly of value. More often, we’d just take someone else’s junk to live on our lot for a while. Then we’d have our own sale. It was a somewhat closed system with the cycle continuing as if there was some kind of perpetual motion machine behind the curtain.

The people who went to these sales were a closed and insular community. All the usual faces, all the competitive bartering, and, inevitably, all the usual arguments. From time to time, things would devolve into fisticuffs, but mostly Saturdays were civilized. We kept whatever passed for decorum in a park peopled by blue-haired old folks and rednecks.

The old battle-axe Mavis O’Brien was out one week in her battered housecoat and filthy bunny slippers, her hair unwashed and unkempt. She was smoking a homemade cigarette as she tended to her rickety card table full of chipped ceramics, broken appliances and ancient Barbie dolls whose hair resembled her own. Dust, ash and the remains of many dead carpet beetles peppered her wares.

I was taking the tour on bicycle in an attempt to distance myself from my folks who were arguing with Jimmy Timmins a few lots back over a broken vacuum cleaner. I don’t know why. We didn’t own a lick of carpet bigger than a mat.

My pocket was bulging with coin burning a hole in my pocket since I scored at the bottle exchange, returning Dad’s empties. He took most of the coin as a rule, but I always managed to skim enough to make it worth my while.

Reveling in my freedom and wealth, I was giving the O’Brien’s ramshackle trailer a wide berth. I glanced over, compelled to bear witness to the train wreck. I noticed a small brown box that would be perfect for my hockey cards. The wooden box had no design or ornamentation. It had no hardware aside from a plain brass plate with an old-school keyhole. The box looked old and well-maintained. Made of maple and well-oiled, it was beautiful in its simplicity. Even as a kid, I appreciated craftsmanship.

“How much for the box?” I asked sheepishly, a little bit afraid of her.

She coughed and swallowed, clearing her throat of mucus and spittle. “Fifty-cents” she said.

I kept thinking about how perfect the box would be for my cards and figured I’d be able to break the lock and pry it open. I didn’t care if the lock ever worked again. The keyhole itself was cool. As I gave her a couple quarters, she grabbed my wrist with her wrinkled, bony hand. Her breath smelt awful, like an ashtray mingled with the rotting food of neglected dentures.

“The box belonged to my little brother. Take care of it.”

In the back of my mind, I remembered Dad and his buddies yakking about Bad Tommy O’Brien hanging himself in prison last year. Dorchester was not a nice place back then. It took the worst in men and fed it back to them. I looked at the box with a grim respect and then met the old bat’s gaze.

Now, that was many years ago and I’ve since moved back to the park after my folks passed on. I was cleaning up their belongings, contemplating the yard sale to beat all yard sales. I came across a collection of my old things in the tin shed behind the porch. Most of the stuff was mildewed and ruined, but the wooden maple box was still there, unbothered by time and weather. I never could steel myself to open it. It just lay forgotten for all these years.

I wonder what’s inside?