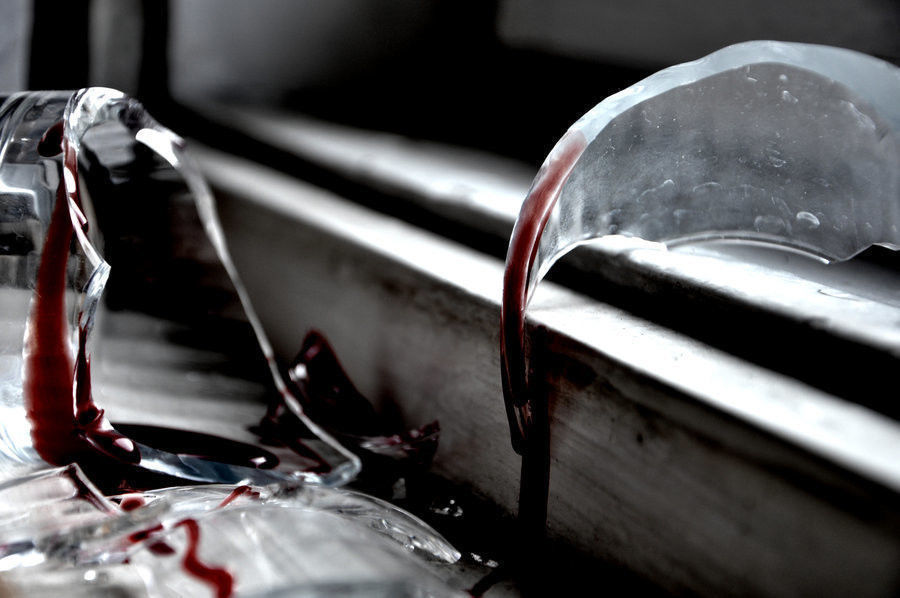 It was a slow night, even for a Tuesday. The rain kept everyone off the streets and away from the watering holes. That suited me just fine given my mood as of late. I went from table to table and started to put the chairs up. I flipped the sign to ‘closed’ and threw the bolt just as a familiar face crossed the window. Talia waved to me, miming at me to let her in.

Like I said, it was Tuesday. I was also a sucker for female company, even if it was only for drink and conversation. Tonight, of all nights, anyone’s interruption would have been welcome, but Talia’s arrival was timely. I let her in, and left the sign turned.

“You look a little soggy. I’ll get you something.”

She nodded wordlessly, her head held slightly down. I pointed to the bar and went to the staff room. When I returned, I handed her a towel and watched as she dried her black hair. She’d taken off her jacket and was dressed in jeans and a fitted t-shirt. I noticed an alarming amount of fresh scrapes and bruises starting to blossom on her arms. I made my way around to my side of the bar, as it seemed safer to have that barrier between us.

“A drink?” I said, breaking the silence filling the space.

“Sure. Something strong. Got any brandy, Jamie?”

She smiled at my jibe but still didn’t raise her head. I racked up a couple of glasses on the counter and poured, leaving the bottle at the ready. She took one from me and looked around at the empty room.

“Busy spot,” she said, turning to face me.

“Yeah.” I caught a good look at what she was obviously hiding, apparently for good reason. “Christ, what the hell happened?”

“I was in a fight. I won. You should see the other guy.” Despite a forced smile, her joke fell flat. A saw a cut lip and crusted blood along her hairline. Swollen cheeks and an ugly looking shiner completed the package. I grabbed the first aid kit from under the bar and ran a steel bowl full of warm water. She didn’t resist as I fell back into the role of field medic. She knew what I used to do. Some skills you never forget. Others, you wish you could.

Her battered face told a victim’s tale, but her hands spoke of harder stuff. Talia didn’t make it easy. Her foe met with a warrior’s heart and a fighter’s fists. She inhaled a hiss as the antiseptic spray bit her knuckles. That was the only complaint.

“Thank you, Jamie.” She was sincere and so was I.

“You’re welcome. Want to talk about it?” We were halfway through the bottle already. Neither one of us wanted to be alone. Her demons were more visceral, even if my own threatened to consume me.

“Bruce. Really? I thought he treated you well.”

“He treats me like a queen. It wasn’t him though. It’s that other dark man that’s also Bruce. He’s violet, angry and cruel, but I love him too.”

Tears rolled down her cheeks. My own were hot with fury. I’d known Bruce since he was a boy and I was still a soldier turned beat cop. For a time, we were comrades in the good fight, maybe even friends. A lot had changed over the years. Not all of it for the better.

I studied her intently. There was no other way. She had that effect on me. Talia aged gracefully, if at all. It was her dad’s last gift to her. I wondered if Bruce knew how old she really was.

Not that it mattered. He gave it all up for her. Bruce said he loved her, that he wearied of fighting it. He promised. I let him go, for them, for all of them, and for me. Others carried that burden now.

“To be honest, I don’t think he ever was. He’s less so these days. Why don’t you come visit anymore? Bruce is better when you’re around, more centered. He needs you, Jamie.” The unspoken, I need you, was written on her face. It shamed and unnerved me.

“I just can’t. Too much has happened. Bruce and I, we’re not good for each other. All I am is a reminder of duty, of all that has gone wrong. You know that more than anyone.”

“What about you, Jamie?” she asked, already knowing the answer. It wasn’t Bruce’s fault, but now that Sarah and Barbara were gone, I was truly alone. I looked in Talia’s eyes. Clever girl. She was deflecting. Wounds heal quickly but scars never fade. I couldn’t lie to her.

“I’m not at my best. It’s been a hard couple of years. Clearly, it’s not all wine and roses for you either. What are you going to do?”

“I don’t know, Jamie. He has these, these skills. I can’t leave unless he lets me go. My white knight has gone dark.”

He always was, I thought. That was his nature. “I can protect you, Talia.”

“I don’t need your protection. I can take care of myself.” She was annoyed. I should have known better. It wasn’t her that needed saving at all. She needed me to be a friend, to help the broken man she called husband.

“What do you want from me? I can’t turn back time. He has to want to be whole. That anger is his strength.”

“It doesn’t have to be, Jamie.” She put her hand on mine. “I know about your plan. You don’t have to do this either. We can help each other.”

“We’ve been doing this dance for a long time, now. Did you really think you’d keep this a secret?”

“Partly for you, but mostly for Bruce.”

That stung a bit. We all made our choices. “What can I do?”

“He won’t have anything to do with me.”

“Call him anyway. He’ll come. He owes you that much.”

I didn’t hear the door open, but suddenly Bruce was there in the bar with us. “Don’t bother,” he growled. “Talia, it’s time to come home.”

She stood up and faced him, ready-stance and squared shoulders. “No.”

“Bruce, this isn’t what it looks like.” All I could think was thought, word and deed.

“Shut up, Jamie.” Bruce was drunk and dangerous. He came towards me and lifted me up by my shirt collar with his left hand and balled his right. Pinned forward to the counter and back arched, I was no match for him. I wouldn’t survive a strike like that.

The gunshot was deafening inside the room. Bruce let go of me and his face slackened. He fell, a hero twice fallen.

Talia stood a few short feet away, her hands gripping her pistol and shaking. She was crying. I went to her.

“Give me the gun,” I said as I put my hands over hers. She let me take it from her and put it on the bar. I gathered her in my arms and she pressed her face to my chest. I kissed the top of her head. I loved her and it was wrong.

There wasn’t anything left to say.