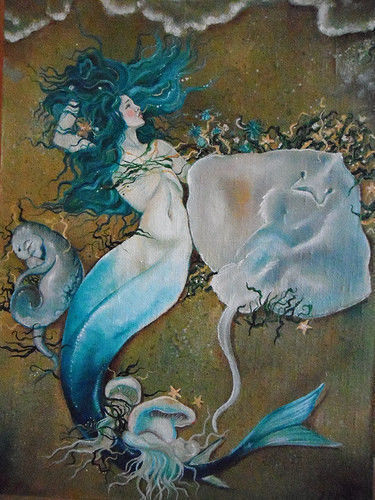 Murderer! Murderer! I thought I would ne’er hear that word.
But to my woe, you now bestow that label — many times have I heard.
Now this is the day that I must pay for an act upon the mercilessly slain.
It is sublime for such a crime to conjure not images of pain.
To you, in duress, I now confess the particulars of my deed.
I will not lie or attempt to try, but to my few waid words you must heed.

It all began on the Isle Arran in the ville of Lamash.
A storm did last and I saw a mast, and on our shores — ruin’d — the craft did crash.
I could not wait — I must investigate — and into its depths did I roam.
And from its mass, I carried a lass from the nest of an evil gnome.
But Alas! The crew, all twenty-two, knew that their fate was doom.
For all were dead and in this dread, naught could I find but gloom.

So, from the foam and to my home, the near lifeless girl did leave.
The wind, it scream’d and on she dream’d and there was naught that could repreave.
The storm did cease, for there was peace, and the fair lady did awaken.
I found her name and she stated her claim and into her love was I taken.
As she came to health and lively stealth, we celebrated in wond’rous life.
It was not long before the bell’s soft song and the seafoam mistress: my wife.

We cast our nets and our ambitions met; we kept a sacred tranquility.
For we kept past years in yesteryear and lived in perfect humility.
But her past was haunting and even taunting and I feared I could muster no longer.
Sleepless nights and wond’ring lights yet wanting grew ever stronger.
T’was horrid tension e’en at the mention, but stifled not did my question glisten.
Then one bright moonless night, there was no light, to her reply did I truly listen.

What she said filled me with dread and has marred my heart e’er since.
She spoke of fire and she spoke of ice and she told of magic’s sea-bourne incense.
Dark sea mists and vapourous fists surrounded her shorouded words’ noise.
Untimely gales and sea mariners failed; cherbrum-magic sang her voice.
Charismatic and sound emphatic; her power churned the ocean’s death.
Her song was a plea and it came from the sea, chanting was her breath.

“Mine eyes enhance its vibrant dance. My hands raise its breeze and gales.”
“To have me is to have the Sea and that holds many trails.”
“The ocean cold and the Waves unfold both conceal anticipation.”
“But mine existance by the Ancients’ insistance demands my dedication.”
“I belong to Corral and Eternal Balmoral and with you my love is shared.”
“Through Fortune’s land and Fate’s strong hand, but to love you I have dared.”

She spoke of love and peace’s white dove and she told of the sea’s white glimmer.
She tended to fish, hearkening their wish and her magic, it made me shimmer.
But my love was great — to much instate — and my amourer’s rage was sparked.
Mine eyes grew red. I’d lost all t’was said and the shade o’er my face grew dark’d.
Magistraite, I plea! I have killed the Sea and I have killed my lady!
By love’s sweet chance, I have held the lance and I have killed my lady!

Murderer! Murderer! I would have ne’er heard that word.
But to my woe, you have bestowed that label — many times will I have heard.
This is the day that I wish to pay for an act of merciless love.
I ask only the bliss of my fair angel’s kiss and the kindness of a dove.
To you, in duress, I have confessed the particulars of my deed.
I have not lied or e’en tried, yet now…. my soul will ne’er be freed.