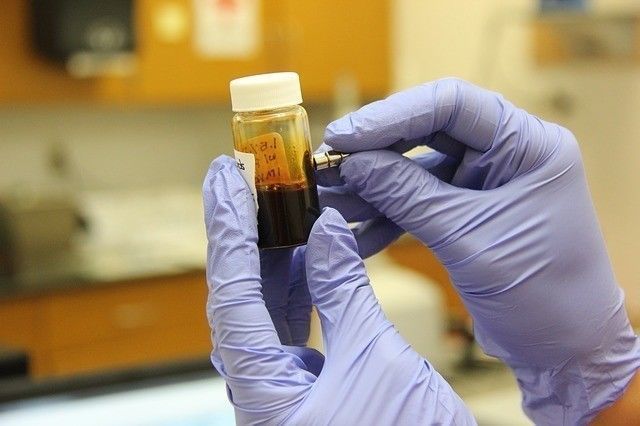 Grace raced to the emergency pull station on the other side of the room. There wasn’t much room for debate and doubt on this one. They fucked up. The quarantine alarm blasted its clarion as the medical grade doors sealed them into the research bay.

“Michael!” she yelled over the din. He stood looking at his hands in front of him, dumbfounded in disbelief. Oxygen rescue masks dropped from the ceiling. The countdown started. Shit. There’d only be a few seconds before the halide gas filled the room, displacing the oxygen. She started waving her arms. “Michael!” He looked up to see Grace put on the mask. He understood and followed suit. They both dropped and tucked their exposed skin as best they could. The gas burns would heal and scar, but the numbness of the nerve damage would never leave.

Grace waited. The alarm continued its assault. She tried to quiet her mind by running though the shanties her grandfather used to sing when she was young. Curled up on his lap with her ear pressed to his chest, she could feel the music and be lost to the calm. With an ‘I’se the b’y’ and a ‘where’s your troosers’, Grace weathered the storm.

With a loud mechanical clunk followed by a whoosh of moving air, the chemical fog lifted. Her ears popped and rung with the change in pressure and relief from the siren. The emergency light still flashed its notice. They were still on isolated aux power. Quarantine was still in effect.

When the heavy fans shut off, Grace stood up and tested the air with her nose. It smelled okay, if that meant anything. Her face and hands tingled. She examined her palms and winced, happy for the moment that a mirror was not nearby.

Grace made her way over to where Michael lay. He wasn’t moving. She turned his head towards her. His lifeless blue eyes stared back at her. She grabbed his wrist, lowered her ear to his face and took stock. No breath, no chest motion, no pulse. No Michael. Gramps didn’t have a sailor song in his repertoire to make this scene any better. Grace turned quickly and vomited on the floor. Blackish blood curdled in her rejected lunch.

Despite her dizziness, Grace rose and steadied herself on the steel counter top. The dozen paces to the open centrifuge might as well have been miles. She made her way hand-over-hand from table to bench, from scan table to eyewash station. Her peripheral vision left her. Grace knew that wasn’t just a stress response. They saw the same thing in the rats. The limbic system and optic nerve were a part of the prognosis. She’d be blind in minutes, babbling like an idiot not long after. She thought back on her partner. There wasn’t much time to shut this down.

The centrifuge was cracked from the violent reaction. There wasn’t any compound left in the canisters. She imagined it seeping and slithering just out of sight. It would be hiding from her, plotting its next move.

She knew the risks when they brought that sample back from Marianas Trench. It wasn’t really alive, but it wasn’t quite not, was it? Little difference, it killed whatever came in contact with it. Motive didn’t matter. Survival did.

The intercom buzzed overhead. “Grace.” The voice was grim, yet familiar and welcome.

She turned towards the main glass doors. The illusion of freedom taunted her. Doctor Mintz and some five-star jarhead stared at her. Grace stumbled to the control panel beside the door. Hovering over the useless ‘open’ button, she pressed the ‘two-way’ instead.

“Hey, boss,” she said quietly. Her voice was thick as her tongue struggled to work. “Our goose is cooked. This facility is compromised. It’s just me and “The Sludge” here now. I authorize you to scrub. Torch and salt.”

Mintz’ face blanched and his lips formed a tight line. “I’m sorry, Grace. For both of you.” He nodded to the soldier. The man silently retreated to make his preparations. She waved weakly to her mentor as the metal blast door came down. Grace was all alone now. Well, mostly. The sense of ‘otherness’ played with her crumbling mind.

The fans spun up again. Grace smelled the mixture of ether and propellant fill the room. She didn’t bother with the mask this time. The anesthetic was preferable to the flame.