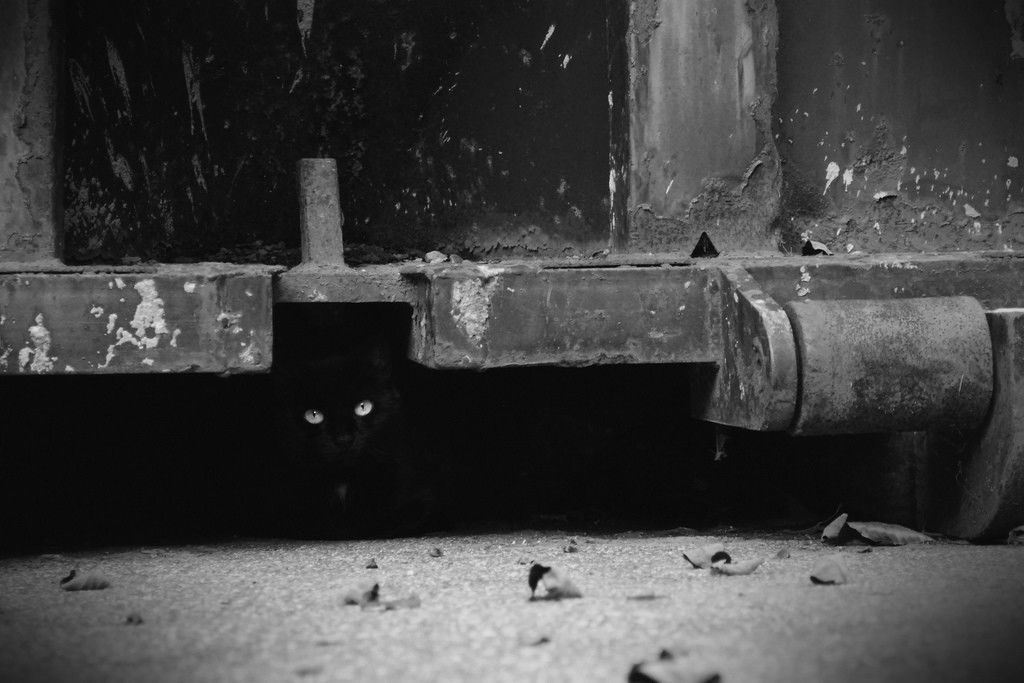 Jonas leaped over the barricade and wormed his way through an opening in the quarantine fence without being noticed, his stolen prize held tightly in his jaws. He knew the smell of roasting meat would give up some spoils. It nearly drove him crazy that humans could be so wasteful.

The cat scurried behind the firetruck and slinked underneath, warily watching booted feet run to and fro. Too often, Jonas had been stepped upon or felt the thump of a steel toe. He dropped the scrap of scorched flesh and sniffed. It was always good to take your time, to savor the moment. Too often, Jonas had to gulp his food or risk losing it. If it wasn’t other alley cats, it was the rats. Always the rats.

The morsel was smooth on one side and fleshy on the other with a dangling bit of a treat attached, swollen from the heat but not yet ruptured. He licked the saltiness of it and knew it’d be the best part.

Jonas peeked out from behind the big wheel in time to hear the whump-whump of the approaching man-bird. Looking at the building, he felt the primal fear of his recent escape. His own fur was burned, shorter on his back and outright missing along his left rear quarter.

The girls would have to wait before this Old Puss went prowling again.

He’d been sniffing around the green and yellow waste containers when the first explosion hit. It always smelled like food there, but he could never figure a way to breech inside. Trucks hauled it away every day and left one in its place that smelled like ‘The Vet’ where his family took him before he fled years ago.

Another explosion of flame and breaking glass rained debris amid a wave of hot wind and sent the men in a renewed frenzy. Jonas watched with feline amusement and he started to eat. First he picked off the flesh from the underside of the torn bit of cheek, then he bit into the orb; its hot juices ran over his tongue and down his throat. It was a taste beyond his simple imagining.

Licking his paws and washing his face, Jonas started to feel warm, not from the firestorm a few dozen yards away, but from his belly. It wasn’t the nice heat of a sated appetite. This felt wrong.

More vehicles showed up, different trucks that he hadn’t seen before. They were green. Many more men were here now and the mayhem evaporated, but not the danger. Jonas sensed the change in mood and hunkered low to the ground as he made his exit away from the quarantine zone.

Back in his home alley, Jonas stumbled and leaned to one side, bumping and scraping his already sore body. A few other cats came over, sniffed, hissed, and then ran away. Friends and enemies alike, no one would have anything to do with him. Jonas was sick. He felt cold and the world alternated between bright red and cold black. The fire in his belly now reigned rampant throughout. His mind raced as fast as his little heart.

Jonas was dying. He could see the rats. They waited in the shadows and he was afraid. The rats would come. The rats would feast. His last thought was of how delicious his poison apple was.

The blackness ruled for an untold time, then awareness crept in. He felt the pull and tug of tiny teeth tearing apart his little body. First one set, then two, then many more. Everyone had to have a taste. He let them. He felt no pain, only a gripping hunger.

The battered tom rose from where he lain and lashed out to the nearest opportunist, larger than most. His claws ripped open the rat’s throat, dividing the attention of the wriggling swarm. The feeding frenzy abandoned the now reanimated cat.

Wild and strong like a panther, the hunt already loomed large in his psyche. It swelled reborn now, and the cat formerly known as Jonas quit his alley, seeking more challenging prey. The rats, he once feared, followed.

And thus, the plague was unleashed.