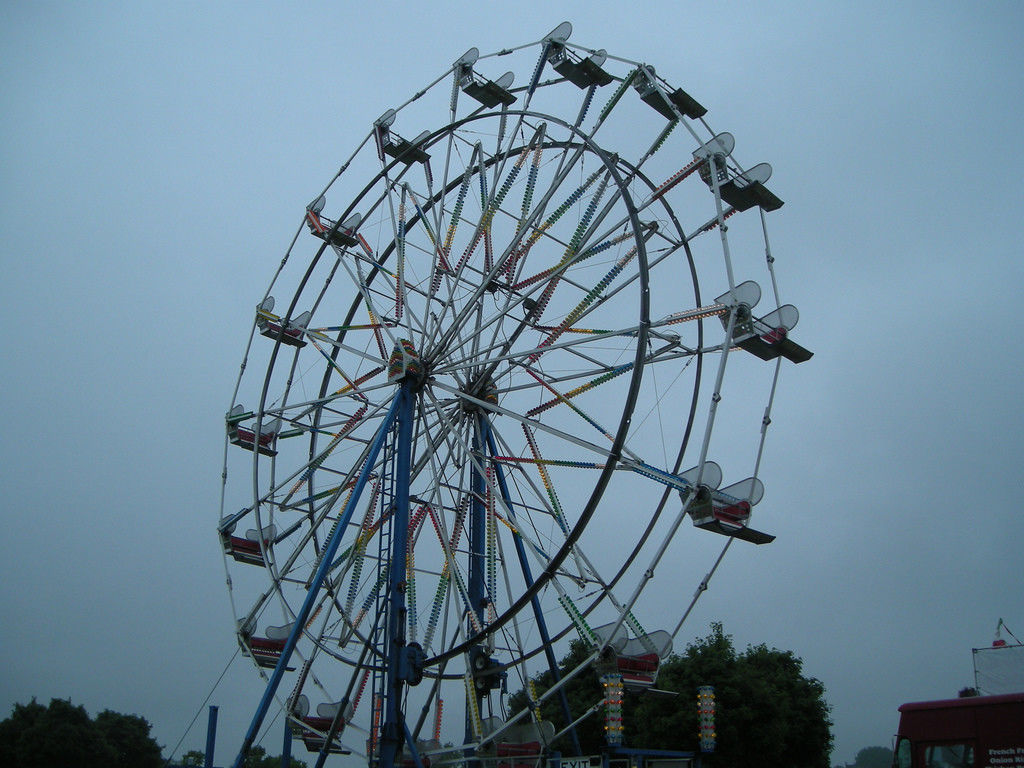 Candy emptied the tobacco can in the sink, put it back under the leaking window and sat down. The chair squeaked its complaint, but bore the man’s girth steadily. It had been raining since the middle of the night. Everything was soaked. The crew was hunkered down in Cranky’s trailer. It was supposed to clear up around supper time. They’d be able to open up and things would be a-hopping. Friday nights were always the busiest at the carnival. But right now, it was only a little after noon. Everyone was getting bored and a little stir-crazy.

The trailer was one of those tow-behinds. It served as Ross’s office, Cranky’s tool-shed and the staff kitchen. On bad weather days, it also sufficed as a holding pen and makeshift games room. Greasy, Candy, Wheeler and Tix were seated around the worn but serviceable chrome table. The foursome were deeply entrenched in a game of ten-cent ante.

“A dollar,” said Candy as he tossed a loonie in the pot. “Two cards, Greasy. Make ‘em good.”

Greasy grunted and dealt him a pair. Even though there wasn’t much to him, he sweated like the proverbial pig, more so when he was in to the corn whiskey. It was a good thing he was shrewd with his dough. A high-functioning drunkard had to be.

“Shit-balls!” muttered Candy aloud. He threw his hand down in exaggerated disgust. He didn’t fool anyone, certainly not Wheeler. She had his number.

“Match and raise another buck”, she challenged. The old gal had been around this table many times. It was late in the season. Everyone knew each other very well, some intimately, and some wishfully so. Habits, quirks and ticks. All were tells to the wizened or observant. Wheeler was both. She put her hands in the pouch of her hoodie to warm them up. The dampness got into her bones and ached painfully. She’d be pretty useless come tomorrow.

Tix was just a college kid, and a pretty one at that. Much to the crew’s dismay, she’d be moving on next year for graduate work. Anyone and everyone would spend their last penny to take Tix for a ride, even Wheeler and Spins. But, alas, Ross’ daughter was off-limits. Officially, that is. “I fold, you crazy assholes.” Tix slid her cards face-down under the heap of loose coin. She had only a hand or two of stake left. Three, if this hand went south. She stretched her arms above her head and yawned. Greasy and Candy silently approved the display. Wheeler shot a dirty look their way.

Candy tossed his cards. “Take it, Wheeler.” Greasy passed him the button.

“Where the hell is Cranky?” grumbled Greasy as he got up and looked out the window. The rain slapped against the pane as the sky whipped and whirled. He grabbed his fixings and started rolling another smoke while Candy dealt. Tobacco crumbs peppered his shirt.

“Most likely peeping on Spins and Teddy, I expect,” said Wheeler. “Roll me one too. Make it special.” She tossed him a baggie from her pocket. Anything to take the edge off. Greasy snatched the weed greedily and set to work.

The trailer door opened and the wet wind blew Greasy’s handiwork all over the table. Spins and Teddy sauntered in, drenched and dripping.

“Close the God-damned door!” barked Greasy as he tried to salvage his efforts.

Candy regarded Spins, sizing her up as he always did. “Is it my turn, Spins?”

“Fuck you, Candy. I’m too much woman for you.” She grabbed a couple of towels and tossed one to Teddy. With the other, she started squeezing the excess water from her hair. “Not too much for Tix, though.” She gave the younger girl a wink. Tix blushed and Teddy snorted. The remote possibility of the three of them cuddled in the back of his van gave him a moment of ponderous distraction. Spins laughed, owning the room as usual. She took a glance at Wheeler. “You okay, hon?”

Cranky came through the door then. The rain was slowing. It looked like it might clear off a little early. The wind was still up. Eventually, it would blow the storm away. Cranky had to pull the aluminum door closed quickly to keep the breeze from tearing it off the hinges. “Greasy, you idiot! You fucking moron!” Cranky threw a handful of large lug nuts in the center of the table, scattering the cards, coin and rollies.

At just after two-thirty in the afternoon, a strong gust of wind amid the bluster of the waning system caught the empty buckets of the Ferris wheel. At first, it didn’t make a sound as it leaned towards the tipping point. A loud metal groan followed by an even louder snap and bang announced the inevitable. There was a short moment of peace as the giant wheel tilted precariously. Then, it toppled and fell in on itself, thundering and twisting into a heavy heap atop the crew of Callaghan’s Carnival.

The rain stopped and the sun broke through as emergency crews arrived.

Photo by Sweet One