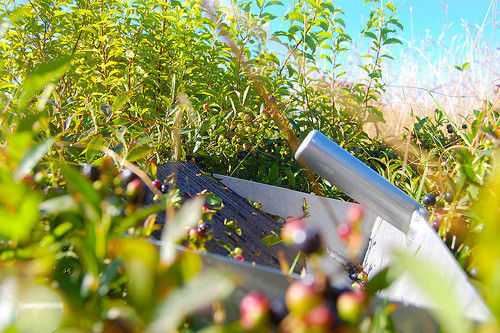 Martin slipped his battered old pickup into neutral and turned the engine off. Ol’ Trusty coasted behind the bluff and crunched on the gravel shoulder. He winced at the squeal of her brakes. He didn’t think that miserable old bastard could hear bugger-all anyway, but he ducked lower in the cab just the same.

As hot as it was in the truck, when Martin opened the door a weighty soup of hot damp air greeted him. It had rained through the night, but the cloudless summer sky undoubtedly promised a stand-down later. He would make his move then. All the field-hands would be ensconced under a shady tree at the brook awaiting the call back to work. Boss Mikey would be living it up in the timekeeper’s shack, a fan and some wobbly-pops within hand’s reach.

He’d worked here for-fucking-ever. He burned the finished fields, spread the seedling plants and tended the high-bush varieties year-after-year. He was good at his job. So much so that when the snotty nosed teenagers came by the busload to rake next month, there wouldn’t be a stringed off line that wasn’t a bright sea of blues. Blueberries were a hard business, but profitable. Especially when dim-wits like him were a-plenty.

Boss Mikey knew that Martin was a soft-touch and milked it. Brutal verbal abuser and relentless taskmaster, Mikey whipped his team hard. It was paid slavery, plain and simple. Most of the hands just sucked it up and moved on as soon as they could. Martin was bright enough to know it was wrong, but not strong enough to change his fate. Boss Mikey exploited that nugget for all it was worth. It was the same day after day. Until yesterday.

The small plastic tub in the bed of the pickup hummed and vibrated in chorus with the insects hiding in the grass on the opposite side of the road. Martin picked it up and checked the bungee cords that kept it tightly closed. A sweet flowery smell wafted through the breather screen, disturbed by the new motion. He closed his eyes and inhaled deeply the nearly intoxicating aroma. For him, it was the smell of payback.

He placed his precious cargo carefully in the knapsack and strapped it on his back. It would need to be secure for the slow approach through the tall grass of the fallow-grounds. It was important that no one saw him.

Boss Mikey handled him pretty roughly when he fired him last night. His arse still hurt from the boot-heel, but his bruised ego wore the pain of being torn apart in front of the other guys. Boss Mikey made sure everyone knew what he thought of Martin and his ideas. He said Old Man Rutledge wouldn’t be trying out any of Martin’s ‘trained bees’ anytime soon. Not on his watch. No-sir-ee. The crop did just fine as it was. Martin was an idiot for even suggesting it. There was no room for dreamers and fools on Boss Mikey’s gang. When Martin’s eyes welled up with shame, his tormentor canned him on the spot. Martin drove away, his truck weaving and wobbling down the road, kicking up dust. No one expected him to come back.

But he was back and when Martin reached Boss Mikey’s shack, it was as he expected. The stand-down was indeed in effect, and the shack was shut tighter than a drum to keep the cool in. The genny was running noisily. Boss Mikey was most certainly half in the bag and dozing off by now. Good.

Martin loved his bees, and they loved him. He quietly opened the tub and reached inside to grab a piece of comb, a small knot of his little soldiers coming along for the ride.

He worked swiftly and deliberately with his free hand so as to not upset the contents of his other. He quietly opened the door to Boss Mikey’s sanctuary and turned off the fan. He then placed the comb on at the bully’s feet and quietly backed away. Closing the door, he wedged a rake in the jam. The generator’s rattle and rumble did much to cover the commotion that ensued.

When it was finished, Martin calmly removed the rake and went inside. He collected his little instruments of retribution and returned them to the tub. He turned on the fan, closed the door to the shack and retreated to the safety of his truck.

No one saw him drive off into the setting sun.