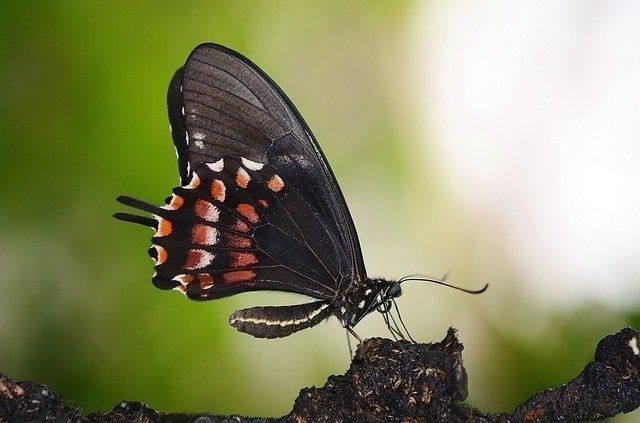 And as quickly begun, it was finished. White magic. My little sister. Gone.

The girl rose and stood in the centre of the overgrown boxwood Maze, no longer sure of anything. Her bed, back home, felt real. Felt like this horror was the dream instead of reality. Birdsong floated from high above.

I have to think. I have to be smart.

The sun peeped through the narrowing canopy as the morning breeze cooled the lingering sweat of nightmare. The little girl turned her face to the fleeting warmth. A black-winged butterfly landed on her cheek and tickled her nose with its feelers.

“Hey-ho, princess,” said the butterfly and took off.

“Mrrapp?” the girl yelped and stumbled backwards, cracking her head on something hard, cold and metallic. She spun around. Was that there a moment ago?

The wrought-iron post with the embossed ivy design didn’t answer. It just stood there. A placard hung from it with strange markings.

“Read the sign, Toots” said the butterfly, hovering erratically nearby, just out of reach.

The little girl balanced on her tiptoes and squinted. “I can’t read it. Just gibberish to me.”

“Really?” asked the butterfly and fluttered to the top of the sign, meeting the girl face-to-feelers.

She shook her head.”Really. No one reads any more. And my name isn’t Toots and I’m not a princess. Not a real one, anyway.”

The butterfly rubbed its front legs together. “What shall I call you, Miss Not-a-Real-Princess?”

“Fine. Mitzy. You can call me Larry.”

The butterfly cleared its throat, sounding like her Uncle Bart after too many sessions with the pipe. “It says: You have one hour. Don’t touch the walls.”

“What’s that supposed to mean?”

“What do you think, Mitzy? Where’s June? How’s your little sissy?”

“She’s in the Maze. I remember now.” She looked at Larry agog. “Hey, how’d you know about June?”

“I’m a talking butterfly,” said Larry matter-of-factly. “Don’t you have more pressing things to worry about?”

Mitzy squared her shoulders and lowered her voice to almost a whisper. “The Goblin.”

“She’s not really my sister. She’s a faker. We were happy before she came along.”

“You’re just figuring that out now, Princess-Not?” Larry’s easy sarcasm flowed automatic, like he knew no other way.

Mitzy’s eyes watered. She couldn’t speak. No bug is going to make me cry. He doesn’t know anything.

Larry cozened up to her shoulder and whispered in her ear. “Does it matter? June or Fake June? You have to go back into the Maze. Find the Goblin. Kill it before it eats you.”

Mitzy nodded slowly and reached for the iron post with both hands. She pulled and pulled with all her strength and was rewarded with its release from the cool earth. The sharpened spear-end looked dangerous. Mitzy was pleased. A fine Goblin Killer indeed.

The duo left the centre ring of the Maze through the only opening in the tangled boxwood. The humidity of the closed canopy of the tunnel hit them immediately and the muted silence roared in their ears. But on they pressed.

Larry scouted ahead, ruling out most of the dead-ends. Mitzy followed, brandishing her Iron Ivy spear. All sense of time vanished. They only had an hour but there was no way to tell. As long as it wasn’t dark, there was hope.

The arc of the Maze flattening was the only sign that they moved further from the centre-point. A couple of times, Mitzy lost her direction—left and right swapped places. Thankfully, Larry’s antennae kept them true.

She strained her ears and picked up the sound. Breathing. Gurgling hot breath. The Goblin was close. June would be near.

Mitzy pressed a finger to her lips for Larry to shut his nectar-hole and pointed her spear to the sky. Fly up, she mimed.

The butterfly fluttered, corkscrewed and spiralled his way to near the canopy— to where it thinned out enough to see across the wall. Mitzy watched and waited. The breathing and gurgling continued. As hot as it was, it managed to grow even more stifling still.

At last, Larry returned and lit on Mitzy’s shoulder. He crawled to her ear and whispered as quiet as a black butterfly could. “Around the corner. Are you sure you want to do this, Princess?”

With that, Larry vanished, his counsel no longer needed. Butterflies shouldn’t talk anyway. They best mind their own beeswax. Mitzy chuckled to herself at the little joke. She hefted her Iron Ivy above one shoulder, perfectly balanced for thrusting and throwing. The square taper of the spear-point promised a dark business.

Carefully striding sideways along the wall, Mitzy felt the Goblin’s breath as it moved on its side, matching her pace-for-pace.

A few steps more and the wall would end in the bend of the turn. Mitzy worked through her tactics and moves in her mind. No parry. Thrust first and ask questions later. No second chances when duelling a Goblin. This was a battle to the death.

Her own shadow disappeared under the zenith of the midday sun, signalling the end of the hour. We are at the appointed time and place. Both girl and Goblin paused for a moment at the edge of the wall.

Mitzy screwed up all her courage and summoned all her rage. She closed her eyes as tight as she could. Every ounce of energy soared to her arm as she rounded the corner and jabbed the Iron Ivy into the belly of her Enemy. “June,” she screamed. The spear’s point hit a moment of resistance, then slid forward, lubricated by blood and viscera.

The Goblin’s voice came weak as it reached forward along the shaft of its impaler. “Mitzy, sister, what have you done?”