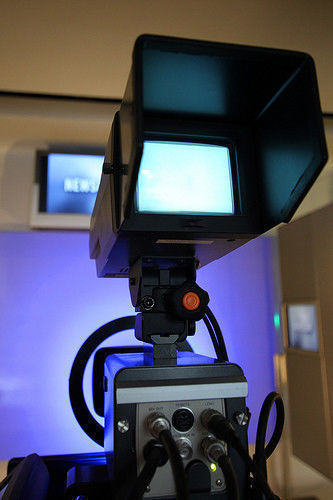 David Pemberton leaned into the mirror and fussed over the crow’s feet starting to creep into his face. He liked the look he was cultivating. While Janice suffered the ravages of age, being a man gave him the edge. His face was one of trust and integrity, all wrapped up in salt-and-pepper hair and white teeth. He smiled at his image and it smiled back. This was good.

“You look like a predator, Davey,” came the slightly nasally voice from behind him. David was startled and annoyed.

“What the hell is that supposed to mean?”

“You don’t scare me anymore, bitch. The desk is mine now. Get over it, you old battle-axe.”

“Such epithets don’t become you, Davey. Anyway, best of luck.”

With that, she swung her hips away and headed off to the makeup room to see what miracles could be performed. Janice still had the second chair to fill.

He still had a couple of hours before the broadcast. David skirted past craft-services and ducked into the green room to review the news lineup. It was a small station and everyone did their part. Two camera operators and a director-slash-editor made up the production crew. Janice would do weather and entertainment. He got the prime cuts: news, sports and the closing happy story. David’s job was to be trusted and beloved, to sell the news. Janice was just a placeholder until Wendy Larson was ready. Then it was out to pasture for the veteran. Good luck in print! Maybe you can start a blog! David chuckled at the thought.

Christian came in the room and made a dry coughing gesture. David looked up. His boss was fidgety and uncomfortable.

“You got a minute?” It wasn’t really a question. David didn’t answer and waited for the old man to continue. “Anything unique in the program tonight?”

“That’s it?” Christian started pacing, an unbecoming habit for him.

“That’s it.” Back and forth, back and forth. David watched the human pendulum swing and let the worry fill the room.

Christian broke first. He never liked the young buck, but such were the cards dealt. “Damn it, David. Don’t be so blase about it. You know this place is on the verge of tanking.”

“The Mustangs lost again and Valentino wants his money, huh?” He couldn’t resist the jibe.

“The sponsors, numb-nuts. Who else matters?” Check. You can officially add hand-wringing to the list.

“Should I be looking, chief?”

“Nice try. We both know you’ve got nowhere to go. Janice wouldn’t play ball. You’re anchor now. I don’t care if you have to make shit up. Get me some fucking eyeballs.”

It was a constant game of one-up-manship between David and Christian. Both men had their eye on young Wendy these days. Not that it mattered in the grand scheme of things. She was out of their league in more ways than one.

Christian stared his best boss-man stare. David considered pushing further. Not worth it. Too easy. He blinked instead. “You got it, boss.”

Obviously, David didn’t have it all. Nuthin, nada, zip. Then it dawned on him. Perfect! Not much time though. His fingers whirled over his phone as he quickly set to work. He had time for one small errand.

At two-minutes to go-time, David sat at the anchor’s desk — his desk. He felt calm and cool as lake water on a hot day. On the other hand, Christian was freaking out. Janice was nowhere to be found and she wasn’t answering hails.

“Where the hell is she?” Christian asked his non-responsive phone.

David answered “She’s not coming. Stay in the truck, chief. I got this.”

Christian was about to go toe-to-toe with the smart-ass, cameras-a-rollin’ or not, when Wendy blew in sporting a pretty yellow dress. “Wendy? What the blazes is going on?”

The girl nodded. She was indeed ready, and had been for a while. Janice kept the thumb screws down, that’s all. Well, those days were done. David was going to have more than eyes on Wendy later. Sorry, boss. Maybe next time.

Cameraman Joe dimmed the lights and turned on the pots. “In four… three…” The last two-second dead-quiet felt like an eternity for Christian. He had no choice but to run with whatever gambit David was playing. All bets laid, hands off the table. Spin the wheel.

“Tonight’s top story. An exclusive anonymous tip to this station and the local authorities hits close to home. Michael Valentino has just been arrested for extortion, racketeering and several organized crime-related offenses. He has been detained and will be arraigned in the morning. Mister Valentino is also being questioned for the suspected murder of our own Janice Henderson.”