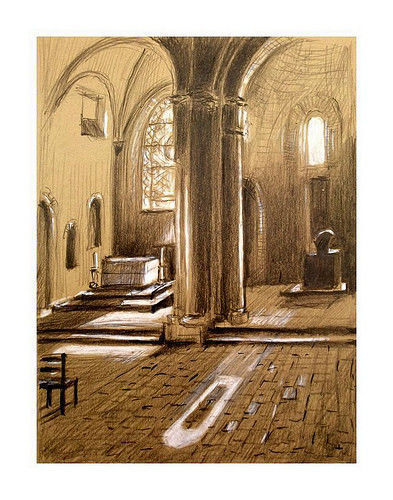 Once upon a time, there was a beautiful kingdom. It shone as a bright jewel among all the other kingdoms. Or at least it did— until a terrible darkness fell upon it.

You see, the King’s court sorcerer messaged in sick that day. Actually, he’d been mucking with some new romantic potions again. The instructions said that if conditions persisted for more than four hours… Well, that doesn’t matter. What does is that since the magic man was indisposed, a darker power was able to take hold.

All the colour and texture in all the fair land was stripped bare. Everywhere you looked, the world had become black and white— outlines and shadows of its former glory. Where once there was happiness, only a grim sorrow remained.

The King fell sick and before he died, he handed a talisman to his daughter— a green and gold label on a small bit of cardboard. “Seek this hero,” he said and closed his eyes for the last time.

The Princess fled to the highest tower and barred the door. As the Kingdom’s people fell into sleepy silence, she would be spared. For a little while at least. She tied the cardboard to a carrier pigeon and sent it aloft. If only this hero could be found in time. If only.

Our brave knight, T.J. Crayons, approached the castle grounds with much trepidation. He had no idea what to expect. The singing frog only said that there was a princess in need of rescuing. But, he would have to complete many trials.

First, he’d have to defeat the homicidal carrot-addicted T.N.T. Bunny Killer. Then, the evil fairy witch Bücky Scribbles would tempt him with spiders and cozy mittens. The vile Cowboy Oh, with his legion of disabled mice and fluffy lambs, would follow and try to thwart his progress. But in the end, it would be The Gnash Rambler who would challenge him most. There really wasn’t much defence against good gingerbread. I mean, who can resist that?

Somehow, TJ would have to find a way. He checked his quiver of crayons. He unsheathed his rainbow sword and tested its heft. He was ready. He had to be. Princess Early Riser needed him.

Would there be a ‘happily ever after?’

The fearless T.J. Crayons, knight and saviour of the Kingdom, raced up the final flights of the tower, heart pounding in his chest. His hand reached out to knock on the door, but he stopped himself and sat on the stone cold floor and dropped his head between his knees.

His sword dripped with vibrant colour—blues, greens and reds. Always red. That was the colour of battle, after all. He was tempted to wipe the blade dry but opted to let the hues soak in and sheath it.

T.J. stood again, unslung his empty quiver, all the crayons long spent, and dropped it to the floor. The small tower window in this anteroom overlooked the land and he gazed upon his handiwork.

The sun had only barely risen. Yet, happiness and beauty erupted from every corner he looked. Pinks, purples, yellow and greens. Children laughing. Yes, this is the fair land of his memory. To see it restored gladdened his heart.

There was only one bit of unfinished business. The Princess.

He removed his sword belt and soiled outer tunic. He would greet her not as a warrior, but as a man. It was fine enough to save the Kingdom, but could he win her heart? Only time would tell.

“The door is open, Sir Knight,” said the Princess Early Riser from within her chamber. “I’ve been up for hours, waiting for you.”

T.J. opened the door and entered. Her smile told him that winning her heart was not an option. He’d already lost his own to her.

And they lived happily ever after.

NOTE: This story is featured in the adult colouring book, Feral Fairy Tales.