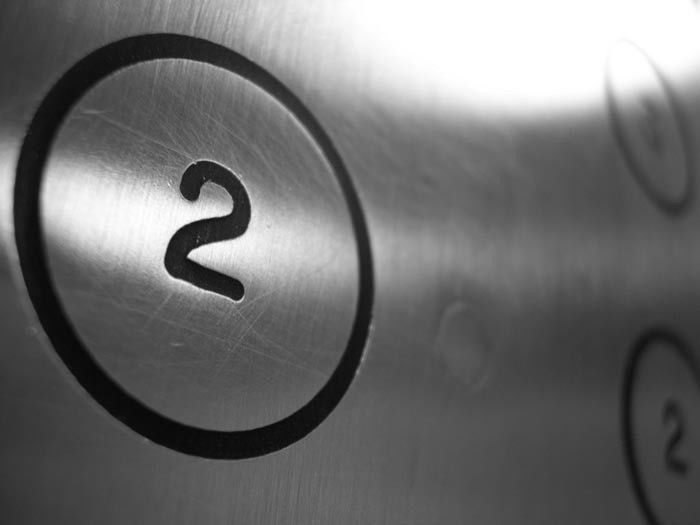 “Hold the elevator, please,” said Trudy. I stuck my arm in the closing doors and they bounced open, to much irritation judging by the disgruntled huff behind me.

“Thanks, Keith,” said the clerk from Infant-wear as she darted inside, smiling. I worked in Shoes and despite being twice her age, I found her company intoxicating.

“No problem,” I mumbled, returning her smile. An older woman flashed a dirty look our way and hit the close button as if it should pay for the delay.

The elevator went from FOUR to THREE and another woman wanted on, this one with a stroller and squawking kid. Seeing the crowd, the young mother picked her baby up and folded the contraption while the elevator doors repeatedly chomped my arm like a hungry hippo. Once, twice, three times, done.

The elevator descended once more and opened at TWO for no good reason. We all looked around for the offender: me with my loaded dolly, Trudy, mom and her cargo, the old battle-axe, some punk with his pants halfway down his ass, the chick at his side, and of course Clarence from Store-standards, complete with his mop and bucket. The door closed once more and the motor whirred for its final descent.

We heard a loud bang followed by a sudden drop and a jolt as the brake cable kicked in. The lights went out, disorienting us for a moment before the emergency lights flicked on. I reached in front of the old woman and pressed the intercom. No power.

“Fuck, Denise” said the punk as he swung his phone above his head like a divining rod. “No signal.”

“What do we do now, Rodney?” whined the teenage girl.

“We wait, deary” said the old bat without even a pinch of sincerity.

Clarence and I took turns yelling for help, but no one came. We sat on the floor with our backs to the cool metal wall.

“That’s just perfect,” said Denise and kicked the wall of our prison.

The air thickened and grew hot with sweat. The baby woke up soiled and as cranky as the rest of us. Clarence started yelling again, more panicked this time. The baby wailed along with him. Trudy buried her face in my chest against the stink and noise.

A couple hours passed and the old woman slid to the floor, cold and stiff. We don’t know when she croaked. Seemingly out of respect, one of the lights went out, dimming the space.

The baby slept in its stroller and the rest of us dozed. I dreamed of Trudy and woke up with her curled next to me. My head ached from dehydration. Rodney and Denise were arguing and things got heated.

Rodney said, “you shut up, bitch,” pushing her roughly. She tripped over the stroller and tumbled into the corpse of the old woman.

Clarence rose in furious motion and I heard a wet thump and gurgle. “That’ll be your last punch, asshole,” said Clarence to Rodney as he dropped awkwardly with a mop handle protruding from his throat.

Denise screamed as she rocked Rodney’s body, his blood spreading in a thick pool beneath her. Trudy ducked under the mop handle, knelt by him and checked for a pulse. Janet huddled in the corner by the door, using the old woman as a makeshift stool, and held her squawking brat. Her eyes were as big as saucers.

The janitor yanked his mop out of Rodney’s throat, releasing a fresh gush of blood, soaking the young women. He swung it in a high arc, spraying the walls, and aimed it my way. Uncertain if he planned to stab or strike, I grabbed the slick shaft and twisted it away from him. A dumbfounded Clarence sat on his bucket and put his head in his hands.

“You bastard”, rumbled Denise as skirted around Trudy, clambered over her dead boyfriend and lunged at Clarence. She pounded on him with her small fists. He tucked his head into his arms and let her strike him. None of us spoke or moved to stop her. She kept hitting him and yelling, “Why”, over and over again. Denise’s onslaught slowed as her voice weakened and fatigue overwhelmed her. She stopped and and sat on the floor, legs splayed, and stared emptily in front of her. Spittle drooled from Clarence’s mouth as his head hung limply. Whether the girl killed him or he simply gave up remained a mystery.

The heat and stench of the stuffy elevator made me ill and I could taste the blood and other things in the air, making my mouth salivate despite my thirst. I spent the night in and out of consciousness. We were numbed by the madness.

Close to morning, Trudy muttered “Oh no,” stood and went over to Janet, still rocking her baby. She reached out to touch the mother who shrugged her off and squeezed her bundle tighter.

“I just want to see how the little guy is doing?” pleaded Trudy.

“Leave me and Nicky alone,” said Janet, low and dangerous, reminding me of a cornered animal.

Trudy looked over to me and I understood. The baby wasn’t crying. In fact, he didn’t make any noise at all. My stomach sank as I scrambled over.

“Shhh, It’s okay, Janet,” I said as I slowly touched her shoulder. She looked at me, crazed, and flinched her already tight muscles. The smell of sweat, shit and spoiled milk made my eyes water. “Let us check on Nicky. It’s okay.”

I held her gaze, kept nodding and reassuring her as Trudy slipped Nicky from his mother’s arms.

“He’s cold,” said Trudy as she felt his face. She smothered him, I thought. God forgive her.

“Give him back,” said Janet. Trudy looked at me, I nodded and she returned the baby.

I looked around at the gore and wondered if he wasn’t better off.

The lights came back on and the elevator’s piped-in music filled the space with surreal absurdity, as the car started moving again. The ground floor light above the door blinked and the door chimed as it opened.

We sat and waited for the world to redeem us.